On the eve of World Cancer Day, (February 4) Yogesh Pawar meets survivors embodying the spirit of the day’s theme and finds inspiring stories with resonances for survivors across the spectrum

“Cancer is a word, not a sentence.” – John Diamon (late British journalist and broadcaster)

Soon after depicting the fiery ferocious Mother Goddess slaying the demon, Odissi exponent Shubhada Varadkar smiles saying the demon she slew was cancer. “You have to live in the moment and own it fully. Be 100 per cent sincere to the karma your destiny has prepped you for.”

This is not a life lesson she picked up from dance. A failed marriage and a determined battle with cancer that came in succession has cumulatively driven this home. “I know I have to fight what has come my way, come what may.” No surprises there. She is after all the daughter of a feisty octogenarian refugee mother, who fled from Quetta two months after Independence and pieced back her life. It’s been over 12 years, remembers the Odissi danseuse. “When I first experienced debilitating abdominal pain in 2006, I was leaving for a London tour. Even now, I can’t imagine how I bore the agony and bleeding.”

Admitted as soon she landed in Mumbai, doctors were shocked she had performed despite a 10cm long tumour across her ovaries and uterus. “Whenever someone speaks of India’s worst terror attack, my mind drifts back to my own 26/11 two years ago, when the tumour was removed.” When tests confirmed it was malignant, her family consoled her about life and health. “[But] I had immediate concerns about a performance at Nehru Centre less than a fortnight away.”

She fought with the doctors and family to perform. “I would lie down mid-rehearsal and avoided steps that would hurt the long surgical cut and stitches,” she recalls, but forbade letting the audience know. “I’ve strived hard to reach here. I didn’t want sympathetic praise.”

The next few months were an acid test with chemo and radiation. “After every chemo session, I’d stare vacantly in the mirror at my face without hair, eyebrows or lashes, barely recognising myself. I even contemplated giving it all up. But then I’d ask myself how I’d give up what was akin to breathing. I began to don a bob wig, extra thick make-up and large dark glasses when out. My wardrobe also changed to include more jeans and kurtis.”

She laughs remembering how some thought she was having a “mid-life crisis,” which necessitated the “Western” makeover. But the most difficult challenge was preparing for the stage. “I’d often have to tie the wig to my ears while dancing as I had no hair to pin it to. Then camouflage that with chunky ear jewellery.”

Even after the radiation sessions were over, she still hesitated telling anyone. Around then, an elderly neighbour was diagnosed with cancer. “When I went to see her, she broke down and said she didn’t want treatment. It stirred something within. I couldn’t hold back.” Varadkar spoke about her own battle with cancer. “It not only composed her but helped me.”

Sharing diluted the pain to an extent. “I felt as light as a peacock plume as months of self-doubt and pity ebbed away, filling me with positivity and strength,” she says. Varadkar writes her experience in the soon-to-release-autobiography – The Peacock Plume. “I want people to know that they aren’t alone in their struggle with cancer. They can fight it and emerge victorious.”

The baggie hoodie tracksuit and the humongous glares are a nice way to keep selfie hunters at bay. As a leading lady in Bollywood since 1991, this comes easily to Manisha Koirala. Though her clinky laughter and the almost childlike voice are dead giveaways.

At the Zee Jaipur Literature Festival to promote Healed (her book on battling ovarian cancer), she has co-authored, the actor said it’s been six years since she has been cured. She remembers reading what Lance Armstrong had said about cancer: ‘We have two options, medically and emotionally: give up or fight like hell.’ And though she was inspired to choose the latter it took her considerably long to come to terms with what this has meant for her and her life. “I now prioritise me-time. I don’t want to be in any rat race and take the day ahead as it comes. A relaxed pace of life also means taking on selective work.”

While being treated for cancer in New York, she ran into a Tibetan monk. “The Rinpoche told me, ‘Every experience, however bad, life throws at you enriches you and unless you don’t make efforts to clutch it, it will be lost’,” she recounts. “While it is true that cancer can be life-threatening, it was destiny’s way of trying to get me to slow down and reflect on life. The treatment only cured me of disease, but it is the mindfulness I accumulated in the process that healed my soul and made me become more equanimous and at peace with myself.” But the actual process of recording her memories of the diagnosis and the treatment was not easy. “I kept blocking out the actual bits about cancer.”

She credits this to her mindfulness that has led her to acclaim with projects like Dear Maya, Lust Stories and Sanju, which she did after being cured of cancer. But it wasn’t easy. “Such a large part of the Indian audience’s reaction to actors is about their looks, hair and the way they carry themselves. Imagine how this plays out in case of actors surrounded by mirrors and cameras, this is more pronouncedly underlined.”

The former United Nations Population Fund Goodwill Ambassadress says she understands that there are social expectations of her as a public figure on spreading awareness about cancer. “This book is my way of doing that.”Her takeaway from the battle with cancer has been a conscious shift to a healthy lifestyle.

Until two years ago, the 37-year-old Kathak exponent and teacher Prachi Jawadekar-Wagh missed being in ‘breaking news’ situations because of her long stints as a TV journalist. “But I don’t feel that urge anymore. I’m now very conscious of my health and how I spend the day.”

The mother of two admits the biggest takeaway from her fight with cancer was learning to value people. “There has been a drastic change in the way I see my parents, in-laws and close friends. I don’t take them for granted. I’m invested in them and ensure I engage regularly. Especially friends who’ve been such rock-solid pillars of support.”

She had made rapid progress as a dancer after quitting TV journalism in 2010 until the Big C came calling. “I found spins and raising my hands above shoulders tough.” She pushed harder only to feel breathless and choke. It reached a point when she had to sleep sitting-down to not choke.“I finally went to a doctor (her own doctor parents are in Pune), who asked for a chest X-ray. When that showed white patches I was sent to a pulmonologist to rule out tuberculosis and then on my parents’ advice, an oncologist,” she recounts. A biopsy confirmed Non-Hodgkin’s Lymphoma (malignancy inside the rib cage) a day before her troupe was performing at NCPA (National Centre for the Perfoming Art) Mumbai on September 24. “It broke my heart. I feared what lay ahead.” She was later given aggressive chemo (spinally) followed by radiation till April 2018.

She feels lucky this transpired when her children are too young to fully understand. “After the chemo, they began to vaguely sense something was wrong.” Fit and back to her dance routine, she now credits Kathak for its transformative power which helped her cope. “Dance kept me going.”

Yesteryear model and actor Deepak Parashar tells us his story. “I feel like my fraternity reduced me to an island where no one goes,” he says, wistfully. His bitterness is evident. “Since I was detected with cancer and word got around, I suddenly became persona non gratis. The same people who would call me regularly suddenly began avoiding me. More than two years later, I still feel abandoned.” He says the fear of being treated as a pariah had made him keep his cancer affliction hidden. “I have given so many years to the industry and it feels terrible to be negated like this,” he said, but makes an exception. “When I went to pay my bills in Hinduja [Hospital], I was told they had been taken care of by Being Human. That was really special.”

In 2016, he caught a cold that refused to go away. It turned out to be cancer nodules on his vocal cords. “I was given 35 radiation sessions, but the doctor said they could not operate on me since that would involve the risk of losing my voice for good.”

He smiles at the cruelty of destiny that both Mr and Miss India (Nafisa Ali) were struck with cancer. He says what has not changed is the love of people on rare occasions he steps out of his gated colony. “It feels special that there are people who recognise you from a film or TV show you have long forgotten.” He is open to speaking to other cancer patients to give them hope. “I have now decided to talk to families of everyone I know who is affected. I request them with folded hands that rehabilitation is not about isolating the patient and making her or him feel different. As far as possible try and treat the cancer but make the patient feel integrated.”

Efforts like World Cancer Day help unite and rally both survivors and their families. “This is important,” says Dr Aashish Contractor, who heads Rehab and Sports Medicine at Mumbai’s Sir H N Reliance Foundation Hospital. He says rehab should not wait for after the treatment. “Therapists should begin working with the patient from day one of the diagnosis. They are then able to tailor-make the rehab to suit each patient’s specifics,” he says, and points out how despite recent advances in cancer therapy, many patients suffer side effects lasting from weeks to months. “Exercise has a positive effect on the physical and overall wellbeing of a patient. We have formulated a comprehensive rehabilitation programme, based on the common problems faced by cancer patients. Apart from the oncologist treating the patient, the physiotherapist, physiologist, speech therapist (where needed), nutritionist, yoga teacher and a psychologist help treat the patient as a whole.”

According to the National Cancer Registry Programme of the India Council of Medical Research (ICMR), over 2.25 million live with cancer, with over 11.5 lakh new cases every year.More than 1,300 Indians die every day due to cancer. Between 2012 and 2014, the cancer mortality rate rose by nearly 6 per cent. In 2012, there were 4.78 lakh plus deaths out of 29.34 lakh plus cases reported. 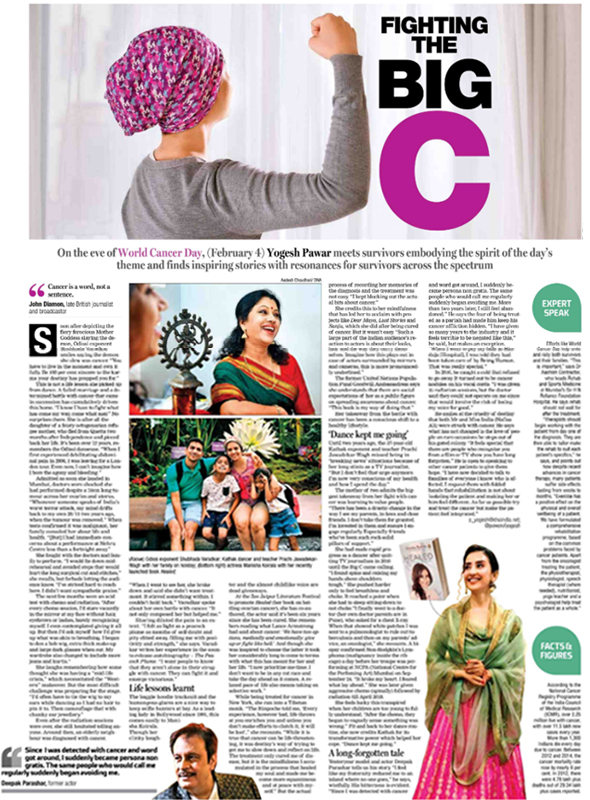