Sachin Palav was born with Senior Loken Syndrome, a rare genetic condition, which resulted in kidney failure and visual impairment. A decade ago, his elder brother died of the same condition. A 29 year-old-man from Sindhudurg got a new lease of life after he received a kidney from his mother earlier this month.

Sachin Palav was born with Senior Loken Syndrome, a rare genetic condition, which resulted in kidney failure and visual impairment. A decade ago, his elder brother died of the same condition. He was 16.

Sachin’s father Bhalchandra, 65, said they shifted him to Mumbai after both his kidneys stopped functioning.

“I lost my elder son in 1999. Back then, health facilities in our village were almost non-existent. Doctors couldn’t figure out why my son was turning blind or his kidneys had stopped functioning normally. In addition, we didn’t have money to shift him to Mumbai,” Bhalchandra said.

Sachin was admitted to Sir HN Reliance Foundation Hospital, where the kidney transplant took place on December 2 , after six months of dialysis.

“My mother saved my life. Although my vision may not improve, I’m no longer dependent on dialysis,” said Sachin.

Dr Shruti Tapiawala, nephrologist who treated Sachin, said, “I have never come across such a case before. I discussed it with other nephrologists and we reached a conclusion that only four types of genetic conditions could have caused these symptoms.”

She said it took two months for the laboratory to send the results of the genetic test confirming Senior Loken Syndrome.

“We had decided to transplant the kidney even before the results came in because we were sure the patient’s condition wouldn’t affect the new kidney,” Tapiawala added.

Dr Bharat Shah, a city-based nephrologist, said in his 30 years of practice he has come across only one such case. “It is uncommon and most nephrologists may not even encounter it during their career,” he added. 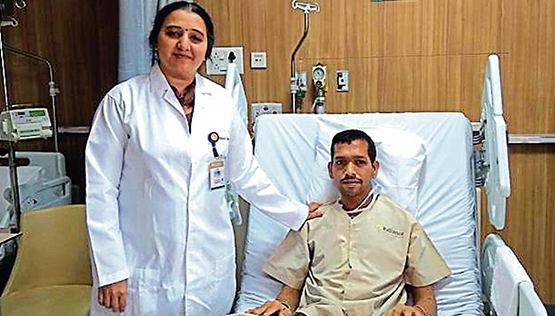