Miracle Baby Has Pacemaker Fitted 2 Hours after Birth at Sir H. N. Reliance Foundation Hospital. Doctors, led by Dr. Shivaprakash – Consultant Paediatric Cardiac Surgery and Head of Paediatric Cardiac Sciences at Sir H. N. Reliance Foundation Hospital helped to fit a pacemaker in a baby within two hours of her birth. The girl, born six weeks prematurely to a Mira Road couple last week, had to be fitted with a pacemaker within two hours of birth after her heart rate dropped dangerously to 42 beats a minute.

The normal heart rate in newborns is 120-140 beats per minute. Doctors say the condition occurs in one in 20,000 cases of preterm birth, and such children require lifetime pacemaker support. The anomaly in this baby was spotted during a routine sonography in the seventh month of pregnancy. The radiologist performing the test found the foetal heart rate to be abnormally low. Immediately after birth on July 25, the baby's heart rate dropped to 40-42 beats per minute, and she had a blood pressure of 60/40 mmHg (it's normally 64/41 mmHg for a newborn). The couple was then referred to Sir H. N. Reliance Foundation Hospital and Research Centre. The consultants at Sir H. N. Reliance Foundation Hospital, diagnosed the foetus with a congenital heart blockage -- that led to a problem with the conduction of electrical impulses from the upper to the lower chambers of the heart -- which dropped the heartbeat to 55 a minute.

Within the next two hours, the team led by Dr. Shivaprakash readied to fit her with a pacemaker. The team faced another daunting challenge -- there are no small-sized batteries available for pacemakers in newborns. They had to use the same battery that is used in children and adults. The pacemaker went into the chest without a hitch. 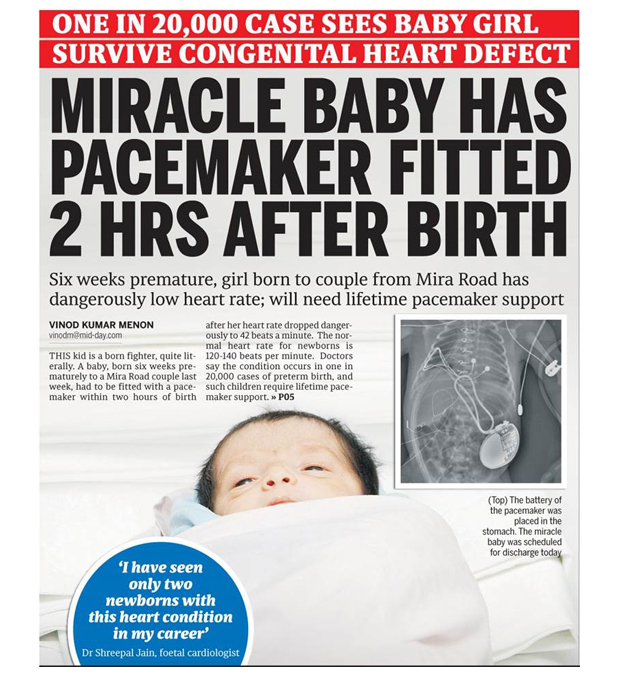