The first robotic kidney transplant surgery was performed, at RFH, on a man suffering from renal failure.

Leena, 55, the wife of patient C.N. Murlidharan, donated one of her kidneys to enable him to live a normal life. The 59-year-old was on dialysis for the past 18 months.

Murlidharan was initially reluctant but agreed after the Doctors persuaded him. The team of Doctors was led by Head of Urology and Robotics Dr. Inderbir Gill, who is also Professor and Chair, USC Institute of Urology at the University of Southern California.

"The family was apprised about the latest robotic technology, its benefits, lesser risk of post-operative infections, lesser pain, minimal blood loss and a faster return to normalcy," said Gill. “Moreover, it enables greater precision over vascular anastomosis owing to higher magnification and finer scaled movements of the robotic instruments," he added.

After the first such successful surgery in Maharashtra, both the patient and the donor are doing well, said Gill, adding Sir H. N. Reliance Foundation Hospital and Research Centre now aims to become the primary destination for robotic kidney transplants not only in Mumbai but the entire country.

The 360-degree movement of the robotic arms, suturing with fine tremor-free movements of the robotic instruments, helps in precise anastomosis and since the incision is not over the site of the graft kidney, infection chances are negligible and recovery is much faster, doctors said. 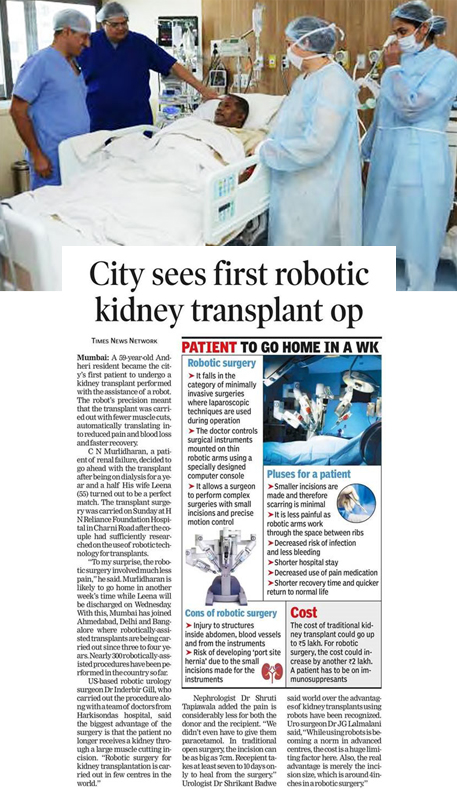