A first-of-its-kind Emergency Transcatheter aortic valve replacement (TAVR) was done at Sir HN Reliance Foundation Hospital to save a 62-year-old farmer who was brought to the hospital with heart failure.

The special type of TAVR, which is Valve-in-Valve procedure, was performed within 4 hours of the patient’s relative and doctors agreeing for the procedure, which is also a record in itself.

As it is well known, TAVR/TAVI is a planned/elective procedure. To organise a TAVR procedure, it takes few days which involves battery of diagnostic tests, CT Scans and planning of team of doctors, deciding on right size of the valve etc.

The patient, Vitthal Kadam, was brought to Sir HN Reliance Foundation Hospital on June 20 evening gasping for breath. Initial assessment showed he had very low blood pressure, no urine output, swelling all over the body suggestive of severe heart failure.

While the Navi Mumbai resident was immediately put on multiple medicines to support his dropping blood pressure levels and dialysis, the medical team was sure that he needed an urgent valve replacement surgery as there was a severe leakage and narrowing of the artificial tissue valve which was put in his heart 6 years back through an open heart surgery.

However, Vitthal was considered to be extremely high risk for an Re-do valve replacement surgery because of his critical condition and previous open heart surgery. Medical team at Sir HNRF then suggested the Transcatheter Aortic Valve Replacement (TAVR) as a better option.

TAVR, which is a complex but minimally invasive cardiac procedure to treat severe narrowing (stenosis) of aortic valve (valve between heart and the main blood vessel). Once the patient’s relatives gave a go ahead, within a short time of 4 hours, the patient was taken up for the procedure.

In this patient’s case, luckily he had undergone angiography a week before he was brought to Sir HNRFH, which further helped the doctors to judge the exact type and size of the previously implanted valve and place the request for the appropriate valve for him. The valve was delivered by the manufacturers within two hours’ time.

The Emergency TAVR procedure turned out to be lifesaving procedure for this patient.

In the hour long procedure, cardiologists implanted a new valve inside the previously implanted valve which had failed, through arteries of the groin and without opening the chest. The patient’s heart failure improved and all his parameters stabilised within no time after the procedure.

Vitthal Kadam was discharged from the hospital on July 04.

In the current times of lockdown, where most hospitals are struggling to cope with even routine surgeries, this was the third TAVR surgery done at Sir HN Reliance Foundation Hospital. The earlier ones were challenging but all them were planned procedures and the patients are doing well. Sir HNRFH is a centre of excellence for this particular type of surgery since it boasts of a proctor-free interventional cardiology team, which has the most experience for this procedure and a hybrid cathlab, which is ideally suited for such interventional surgeries. 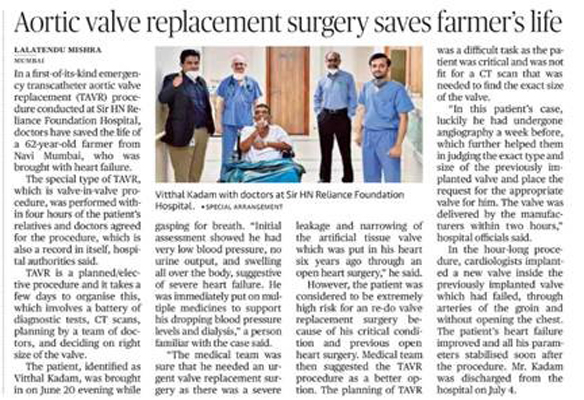